On April 29, 1889 the birthday of the society Chairman Grand Duke Sergey Alexandrovich , the flag of Palestine Society was hoisted for the first time on the corner tower of Sergievsky Hospice.

Upon completion of construction works on October 20, 1889, Sergeivsky Hospice was consecrated by Chief of the Russian Ecclesiastical Mission, Archimandrite Antonine (Kapustin) and since that day started receiving pilgrims.

Located near Russian Buildings and connected to them through the entry gate, the hospice housed a large number of offices and services.

All pilgrims arriving at Jerusalem after 1892 would receive their luggage at the office through the railroad administration; they would deposit with the office their passports, pilgrims’ books and steamboat tickets on the security with 5 roubles paid back when they left Jerusalem.

Additionally, one rouble was paid for the benefit of the Russian Hospital to enable the pilgrims to use free medical service if necessary. Suitcases, chests and other heavy luggage were put for safekeeping in special storerooms that existed in all buildings of the Hospice’s complex.

The 1st and 2nd classrooms were furnished and equipped for long – term stay following the best European hotel standards of the day. The Compound was intended to accommodate and serve Russian Orthodox pilgrims who arrived in the Holy Land through the Imperial Orthodox Palestine Society and were used for their intended purpose until 1914.

At the courtyard, there was a tradition of “funeral dinners”, when wealthy pilgrims gave donations for the remembrance of the souls of their relatives, and free meals were distributed to poor pilgrims from these funds.

The first pilgrim on the Sergievsky Hospice in 1888 was Countess Olga Efimyevna Putyatin (daughter of Admiral E. Putyatin ) – Honorary member of the IOPS.

A number of famous people stayed at the Sergievskoye compound as detailed below:

During the British Mandate in Palestine

Since December 11, 1917, the troops of the English General Edmund Allenby occupy Jerusalem. From 1917 to 1919 the supervision of Russian buildings in Jerusalem was carried out by an employee and a member of the Society.

In 1922, the British Mandate began to operate in Palestine. The English administration recognizes the existence of the Society and becomes the guardian of the PSP and the Russian Ecclesiastical Mission.

In January 1925, she appointed Captain Caste as administrator, who notified the representatives of the PSP that the British recognized the actual existence of the Society in Berlin and the Office of the Farms that had a permanent residence in Jerusalem.

Since 1925, farmsteads IOPS in Jerusalem and the whole land of Palestine, managed by former Imperial consul in Persia VK Antipov.

In 1948, on the eve of the withdrawal of the British authorities from Palestine, VK Antipov moved from the Sergiyevsky compound of Jerusalem to the Alexander Compound in the Old Town .

In the State of Israel

In West Jerusalem, at the Sergievsky Hospice, which soon found itself in the power of the newly-formed state of Israel, the colonel of the Imperial Army, VA Samarskiy, who manages the Sergievsky house from 1948 to 1951, remains the manager.

In 1951, MP Kalugin, an authorized representative of the Russian Palestine Society arrived in Jerusalem, his staff was stationed in the eastern corps of the Sergievsky farmstead in Jerusalem and stayed there until the Six-Day War in 1967.

Sergievsky Hospice was not included in the so-called “orange deal ” in 1964 for the sale of property IOPS in the territory of the State of Israel, the legality of which is contested to date.

From 1967 to 2008, complicated negotiations were held on the return of this historic building to the IPPO to the rightful owner. Representatives of the Society for a long time could not get access to the surviving part of their library, which remained in the eastern building of the monastery.

Delegations of the Society and representatives of the Russian government were admitted to the building only in the presence of the State Guard of the State of Israel, which since 1967 was transferred to the management of this building.

The results of the talks were influenced by the visit to the courtyard of the President of Russia Vladimir Putin in 2005.

The management of the Society submitted official packages of documents for the right to own a house in the Ministry of Justice of Israel and also engaged in official negotiations with the State Guard of the State of Israel in 2006, which was in charge of the building until December 2008.

As a result of the talks in June-July 2008, a decision was made to transfer the Sergievskoe farmstead of Russia. On 5 October 2008, the Government of Israel approved this decision. 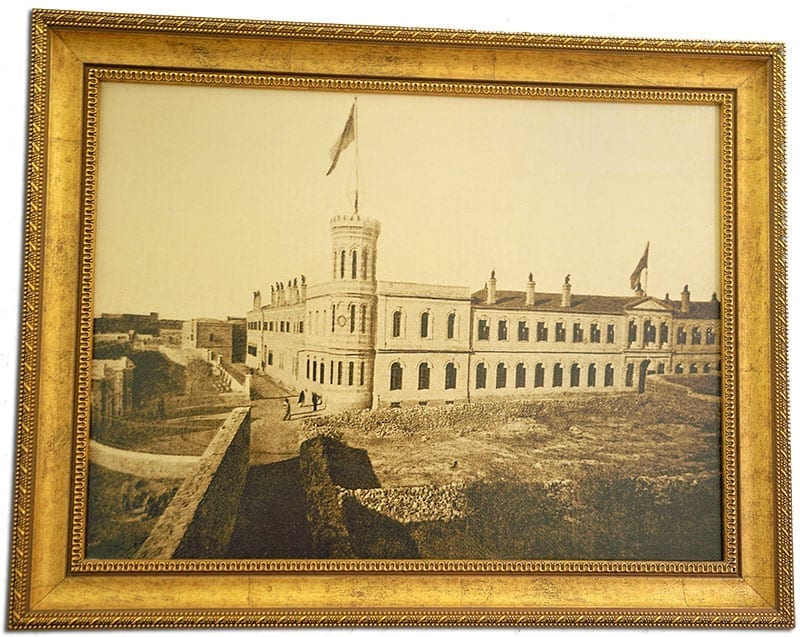